The research line of Transport Phenomena is focused on the treatment of transport and diffusion problems, highlighting the approach to direct and inverse problems, multidimensional, linear and nonlinear, stationary and time-dependent problems. In this line we have the consolidation and construction of computational simulation tools based on numerical-analytical hybrid methodologies for problems applied to the exact and earth sciences and engineering. As examples we can cite: In the topic of transport phenomena, methodologies are developed for the treatment of problems associated with the particle transport equation in different applications such as reactor physics and radiative transfer. In diffusive problems stand out the problems of simulation of pollutant dispersion in the atmospheric boundary layer as well as in rivers and channels, and porous media, using approaches with analytical representation. In heat and mass transfer, problems related to the heating of facades in buildings, as well as the thermal comfort of environments are of interest. Numerical modeling of atmospheric processes includes problems of weather forecasting and environmental monitoring. Such studies are related to the development of physical models, construction of the initial condition (data assimilation and initialization), investigation of the mathematical properties of these models, statistical and dynamic treatment of observation data through conventional and artificial intelligence techniques such as neural networks. In chemical kinetics, asymptotic analysis is used to verify reduced mechanisms of chemical reactions for combustion of biofuels.

The Applied Mathematics Methods research line has two fundamental objectives: (i) to rigorously formulate mathematical models of phenomena that occur in various areas of science, the nature and development of new technologies, and (ii) to develop and apply integrative methodologies. analytical and computational techniques for solving problems inherent to such models. For this, methods from different areas of mathematics are employed to cover as many physical and natural phenomena as possible. Of particular interest are the methods of mathematical, functional and convex analysis, differential equations and dynamical systems, variational and numerical calculations, mathematical homogenization, optimization and control. Examples of studied phenomena and areas of application are: bone biomechanics, physical properties of advanced materials and composites, nanosciences, integrity and structural optimization, process optimization, mechanical vibration, monitoring and control of structures, sensors and actuators, population systems, epidemiology, thermal and electrical conduction, electrostatic, fluid flow in porous media, fluid-structure interaction, propagation of mechanical and electromagnetic waves, radioactivity, communications and traffic, shielding, radiation and thermal shocks, irrigation and soil infiltration, prospecting and exploration of minerals and oil.

The Graduate Course in Mathematical Modeling is located in building 05 of the Capão do Leão University Campus. 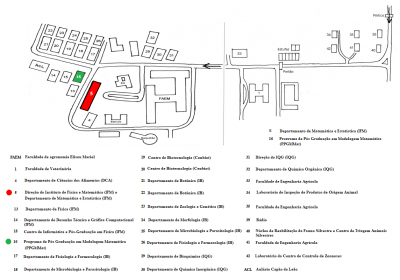