Workshop in Complexity of Water, Other Liquids and Education – Stay at Home Edition

Macromolecular diffusion in strongly confined geometries and crowded environments is still to a large extent an open subject in soft matter physics and biology. In this work, we employ large-scale Langevin dynamics simulations to investigate how the diffusion of a tracer is influenced by the combined action of excluded-volume and weak attractive crowder-tracer interactions. We consider two species of tracers, standard hard-core particles described by the Weeks-Chandler-Andersen (WCA) repulsive potential and core-softened (CS) particles, which model, e.g., globular proteins, charged colloids and nanoparticles covered by polymeric brushes. These systems are characterized by the presence of two length scales in the interaction and can show water-like anomalies in their diffusion, stemming from the inherent competition between different length scales. Here we report a comprehensive study of both diffusion and structure of these two tracer species in an environment crowded by quenched configurations of polymers at increasing density. We analyze in detail how the tracer-polymer affinity and the system density affect transport as compared to the emergence of specific static spatial correlations. In particular, we find that, while hardly any differences emerge in the diffusion properties of WCA and CS particles, the propensity to develop structural order for large crowding is strongly frustrated for CS particles. Surprisingly, for large enough affinity for the crowding matrix, the diffusion coefficient of WCA tracers display a non-monotonic trend as their density is increased when compared to the zero affinity scenario. This water-like anomaly turns out to be even larger than what observed for CS particle and appears to be rooted in a similar competition between excluded-volume and affinity effects. 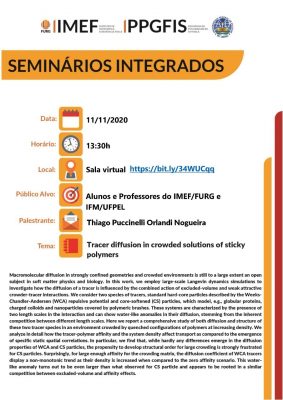