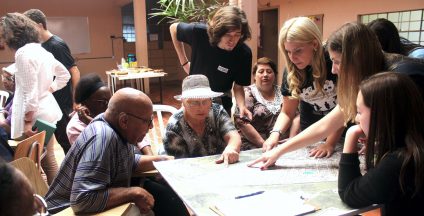 The Behavior Studies Laboratory (LabCom) of the Federal University of Pelotas (UFPel), in Brazil, was created in 2016 within the Department of Architecture and Urbanism of the School of Architecture and Urbanism (Faurb) of UFPel. LabCom began with a group of professors, researchers and students with cross-disciplinary research interests spanning urban design, urban planning, architecture, environmental psychology, social politics, sociology, philosophy, and tourism, exploring theoretical concepts of migration and refugees, social inclusion, social inequalities, health and wellbeing, ageing-in-place, sense of place, resilience and historical heritage. The PlaceAge Project (www.placeage.org), funded by the British Agency ESRC (Economic and Social Research Council) in a total of £1,213,116 pound sterling (1,603,124.01 USA dollars), and coordinated in the UK by Professor Ryan Woolrych and in Brazil by Professor Adriana Portella, was the starting point that instigated the creation of the Laboratory.

We have experience leading research projects funded by both International Councils (ESRC, UK) and Brazilian Federal Government Bodies (CAPES, CNPQ, FAPERGS). Since 2016, the Laboratory is the Brazilian Principal Investigator on the ESRC-funded Project `Place-Making with Older Adults: Towards Age-Friendly Communities` totaling £808,289 sterling pounds, undertaking cross-national research in Brazil and the UK. Since 2018, LabCom is a researcher partner on the ESRC-funded project ‘Ageing Well in Urban Environments: Developing Age-Friendly Cities and Communities’ in partnership with the UK and India. Since January 2019 we have been working in the Brazilian funded-project by CAPES-PRINT `Nucleus of Studies on Healthy Cities, Ageing and Citizenship` in the Federal University of Pelotas, that involves research from Brazil, UK, Argentina, and France. Our research is underpinned by a participatory framework, engaging participants as co-researchers. We have significant expertise in the design and application of innovative methods including photo-diaries, participatory mapping World Cafe and Public Policy Forum. We are also specialists in GIS Mapping and quantitative research based on statistical analysis. We work on knowledge mobilization and public engagement across research, translating research findings into a policy and practice context and working alongside with local community organizations, civil society, government, NGOs, international bodies, and other stakeholders to ensure maximum research impact. We have been working alongside vulnerable groups, notably the work with residents who live in slums and/or have been forcibly removed from areas affected by gentrification in Rio de Janeiro. In 2018, Profa. Adriana Portella went to UNRISD/UN in Geneva to present the work: `The Olympic Legacy of Rio 2016: A City for Whom? ` developed by LabCom.

In 2019, LabCom participated in an important international activity organizing the 2019 IAPS Symposium Ageing in Place in a World of Inequalities: How to Design Healthy Cities for All, with the support of IAPS (International Association of People Environment Studies), with legal headquarters in Spain.

We are always expanding our international research network, and today our international connections occur with researchers from the United Kingdom, India, Spain, Mexico, Colombia, Venezuela, Argentina, Chile, Australia and the USA. 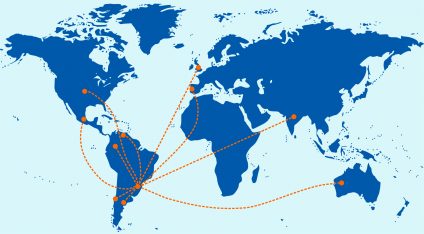 Our studies focus on the major theme SOCIAL INCLUSION AND WELL-BEING FOR ALL, and seek to meet the 17 UN Sustainable Development Goals.

The Laboratory seeks to promote healthy and inclusive cities through research that can support the formulation of public policies in low- and middle-income countries (LMIC). Our investigations are related to how to include vulnerable communities in the city’s design and construction process. Our goal is to combine humanitarian practice with urban and regional development, two fields that have traditionally been based on different areas of academic research.

Our research understands and addresses issues of vulnerability, marginalization and social inclusion and contributes to the development of effective policy and practice responses by supporting inclusive interventions that deliver resilient communities to support the health, social and economic wellbeing of vulnerable groups. The concepts of resilience, integrated urban planning, and urban design are central to our research. The dominant understanding of resilience focuses on the ability of systems to persist and return to equilibrium following a disturbance. However, to promote social inclusion we need an understanding of resilience as “bouncing forward” rather than “bouncing back”. This alternative conceptualization is seen as more compatible with the Laboratory approach – attention is focused on the ability of communities to continue an upward development trajectory rather than merely returning to their original level of vulnerability. Integrated urban planning and urban design are putting together in this concept as a driving force to promote healthy and sustainable cities for all.

• How to design public policies that guarantee inclusive cities for refugees in Latin America. Brazil and Colombia, for example, are undergoing profound urban changes due to internal displacement and cross-border migration. Historically, internal migration has been a key factor, but the flow of refugees, including those fleeing the recent crisis in Venezuela, has created challenges for urban areas in terms of how to provide the necessary physical, social and community infrastructure to support equal health and wellbeing for refugees. The ability to access health services in humanitarian settings, in general, is compromised and exacerbated by scarcity, barriers to information and communication, lack of health facilities and poor urban and housing conditions. In addition, refugees typically face administrative, financial, legal, and linguistic barriers to navigating and negotiating health systems and services. All these challenges are the focus of our investigations.

• The impact of the global ageing phenomenon in Low- and Middle-Income Countries (LMIC). According to studies by the Economic Commission for Latin America and the Caribbean (ECLAC), Latin America is one of the fastest-growing regions of the world. While some European countries took 150 years to adapt to an increase of 10 to 20% in the elderly population, countries like Brazil will have to adapt in much less time. One of the main observations of the UN Population Division is that developed countries became rich first and then aged while developing countries will age in poverty. This creates a challenge that our studies seek to answer. It is not possible to replicate public policies on ageing developed for rich countries in poorer countries, which already have considerable inequalities between sectors of society; the important thing is to understand the economic, social and economic scenarios of each country from the user’s perspective and from there propose public policies that serve the population.

• The development of innovative technological tools and resources (e.g. GIS Mapping and Story Maps), which can be made available to professionals and people involved in the planning of public policies, in order to support the improvement of health and social and economic well-being of vulnerable groups.

• The case of cultural, humanitarian, political and economic emergencies or crises and their impacts on issues such as human rights violations, threats to human security or peace-building processes in the city, destruction of local cultural heritage, cultural production and freedom of expression in the city, gender, social exclusion, slums, marginalization, vulnerability, urban infrastructure, urban violence, health and wellbeing in urban environments.

• People´s forced displacements caused by gentrification (e.g. what happened in Brazil due to the 2014 World Cup and 2016 Olympic Games), and the impact of large-scale migratory flows considering aspects of urban and regional planning.

• Studies of hunger and health emergencies (e.g. outbreaks caused by diseases and pandemics like COVID-19) with a focus on urban and regional analysis, hospital architecture, and access to health supports in the city.

• Reflections on sustainable tourism and how to promote it in Latin American. Sustainable tourism is one that takes into account the needs of the actors involved: local communities, tourists, the tourist industry and the government. While it is economically viable, it does not destroy natural resources and the unique characteristics of local communities, on which tourism will depend in the future. Displacement is a central element in both tourist practices and urban mobility. For this reason, sustainable mobility is the link between our urban studies and research that promotes sustainable tourism in Latin American countries, in line with the UN Sustainable Development Goals. 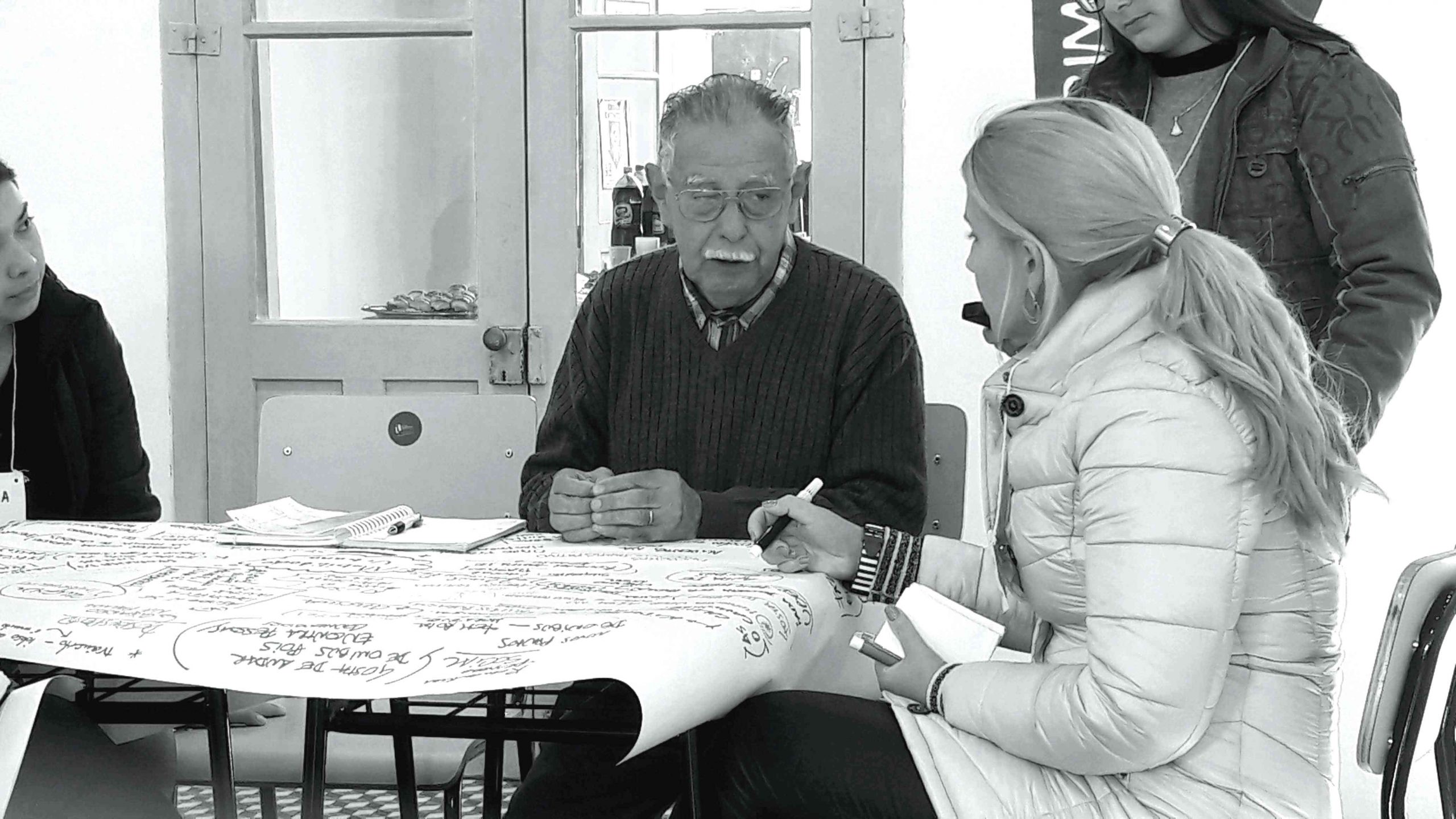