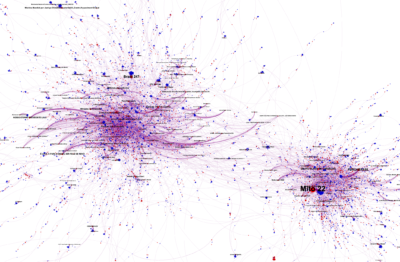 On Sunday, October 2nd, Brazil will vote for president. Most polls indicate leftist Lula da Silva ahead of the dispute, with the far-right candidate and current president, Jair Bolsonaro as the runner-up, but far from Lula.

This election is probably one of the most polarized ones in a long time in the country, thus, it is expected that the campaign was also very polarized. In fact, most of the campaign was marked by Bolsonaro’s frequent attacks and threats to the election system and the electronic ballot and election fraud claims. The current Brazilian president used several occasions to share his beliefs in conspiracies to take him out and for “communism” to take over the country. Bolsonaros’ speeches during office often used conspiracy theories and disinformation to attack his opposers and Brazilian’s democratic institutions He also often showed support for a military coup and claimed there was never a dictatorship in the country, even though Brazil endured a 30-year one.

Bolsonaro’s populist discourse mimics other far-right populist leaders, based on conservative’s views on costumes (even often the president himself often makes sexual innuendos in public speeches), support of the military dictatorship, criticism of democratic institutions, anti-elites and anti-scientific views, support of religious extremism and others.

The Brazilian Supreme Court and the Supreme Electoral Court both held several meetings to show the electronic ballot process (which has been used in the country for more than 25 years) and allow for security checks, as well as public scrutiny forms to check for election results. In August, several Brazilian authorities, scholars, personalities, and politicians launched the “pro-democracy letter” against Bolsonaro’s anti-democratic views.

Lula da Silva, on the other hand, rarely talked about the election process and mostly criticized Bolsonaro’s anti-democratic claims and threats. Lula was the president for two mandates, at the beginning of 2000, and is the representative of the Worker’s Party, associated with the left in the country.

In this context, the key question we look into in this research is: How does the concept of democracy appear for different candidates’ supporters in this polarized context? We believe that the idea of conspiracy and coups in the country will be connected to different views of what democracy is – and how the election represents this process.

To explore this question, we collected data from CrowdTangle, focusing on Brazilian Portuguese and the word “democracy” from the beginning of the presidential campaign (August 15th) to September 22nd. We collected 15076 public pages and groups that posted content about democracy and 36227 links connected to these posts.

To explore the network of links and pages we used Social Network Analysis, focusing on a bi-partite network, with nodes that are links and public pages/groups. We used indegree to map the links that were shared the most and outdegree to show the pages/groups with more activity on sharing these links. We explored the network structure using clusterization algorithms on Gephi.

Based on the network structure, we extracted the most shared links for each cluster and the posts that were used to share them. We further analyzed the type of link shared and the content of the post, to understand how these contents described democracy. For this step, we used content analysis to classify the links and co-occurrence of concepts to create networks of association to describe the discourse from each group.

First of all, as expected, the network is very polarized, with two big groups of nodes that share similar content and almost no connections between these groups. These networks comprise mostly a cluster of pages/groups of Lula’s supporters (on the left) and Bolsonaro’s supporters (on the right). The clusterized structure implies that both groups shared different links, and each group of links circulated the most within the group (Figure 1).

The pages and groups are mostly from supporters of each candidate, however, the sources of the most shared links come from different types of sources.

On the Bolsonaro’s supporter’s side, on the other hand, most shared content came from other pages/groups on Facebook and youtube videos. These contents often made innuendos about how there was a conspiracy to elect Lula da Silva; criticized polls, saying they were “false”; criticized the Supreme Court and the Electoral Court and the ministers and other institutions. Thus, most of the content shared within pro-Bolsonaro’s cluster was based on disinformation, false images, edited content to make false claims, and conspiracy theories (see example on Figure 2). The most interesting part, however, was that part of the most shared links come from official chambers of deputy and senate candidate pages, Bolsonaro’s supporters. From the 30 most shared links, we found 15 videos from other Facebook pages with disinformation; 5 youtube videos with disinformation, and 10 links from hyperpartisan outlets.

Democracy as a Conceptual Dispute

Finally, we also focused on how each group described and connected different ideas to the concept of democracy. In the pro-Bolsonaro cluster, the connections to democracy were similar to Bolsonaro’s discourse. In the group, democracy is strongly connected to “freedom”, as “individual freedom”. “Elections” is strongly connected to “cup”, “left”, “communism”, “socialism”, “dictatorship”, “crime” and “journalists”. Other frequent associations are “God” and “Family” (Figure 3).

These connections show that Bolsonaro’s conservative discourse reverberates on these groups. They  hared content that supported their views on how the left represents a “risk” for democracy, as it represents “dictatorship”, “communism” and “socialism”. The general discourse on this cluster is also strongly based on nationalism and patriotism, using words connected to Brazil, Brazilians, Nation, Green and yellow (Brazilian flag colors), Emojis of the Brazilian flag, patriots, and other concepts.

Democracy, for this group, is very connected to the idea of individual freedom and the combat of the ghost of communism and socialism. Discourses connecting disinformation to the defense of the democracy were also common. For instance, some posts argued that the Brazilian “constitution” allows for a “military coup” to defend democracy against the “communists”.  Conspiracy theories connecting the institutions such as the Electoral Supreme Court, the Supreme Court , election fraud and others to a “leftist coup” were also frequent.

From the pro-Lula cluster, we have a very different picture. The concept of democracy is also very connected to “Brazil” and “Brazilians”. However, it is also connected to “defense”, “respect” and “elections”. The “pro-democracy letter” has a central role in the discussion as well. “Vote” also has a central impact in this cluster. There is also the concept of “coup”, but more connected to “Bolsonaro”. This group also has different concepts from the first one, such as “women”, “death”, “hunger” and “work”, which are connected to frequent critics of Bolsonaro’s government (Figure 5).

Several concepts appear in both clusters, such as “Brazil”, “Brazilians”, “rights”, “president” and “power”. In the pro-Bolsonaro cluster, these concepts are connected to nationalism. On the pro-Lula cluster, on the other hand, these same concepts are connected to an anti-Bolsonaro discourse, with critics of the president. This presence indicates that both clusters appropriate similar concepts to connect to their discourse, as a discursive dispute emerges on the meaning and connections of these words. For one cluster, democracy is connected to respecting the election, and voting, with the liberty to choose and vote for president. For the other cluster, democracy is connected to the fear of socialism, a leftist coup, to crime, and fraud of elections. These are two very different constructions around the concept.

This study shows some context on the social media conversation about the election a few days before the date. It shows democracy is connected to different conceptions and the role disinformation has on these different meanings. One of the key ideas is how the election has been connected to a possible “fraud” or “coup” as conspiracy theories and disinformation freely circulate and are legitimated by these networks particularly on pro-Bolsonaro supporters. This phenomenon may create instability and distrust in the process, as voters may see any problem as a confirmation of fraud and particularly, may not accept or believe the possible unfavorable outcome for Bolsonaro.

This op-ed is part of the project “Global Democracy Frontliners: Transnational Research Coalition for Tech Accountability and Democratic Innovations Centering Communities in the Margins”, coordinated by Jonathan Corpus Ong with support from Luminate/Resonate.

It is also supported by the National Council for Scientific and Technological Development (CNPq). 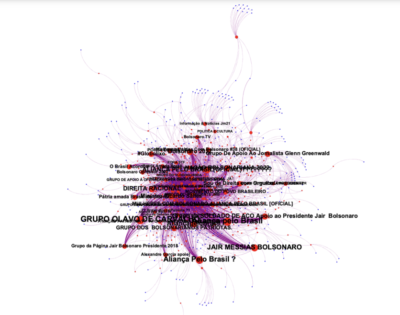 Our research lab has another paper out! “Bolsonaro and the Far Right: How Disinformation About COVID-19 Circulates on Facebook in Brazil” has just been published in the International Journal of Communication. This paper brings some of the results from the research project about Online Disinformation and the Covid-19 pandemic in Brazil. While much has been said about the influence of politicians and the far-right on disinformation, this is one of the first results that brings some data the reinforces this connection is real and political polarization seem to have a huge influence in driving this type of content. Not only we show that disinformation is drive by political content, but also, that fact-checking is unable to circulate among the same pages and groups disinformation circulates.