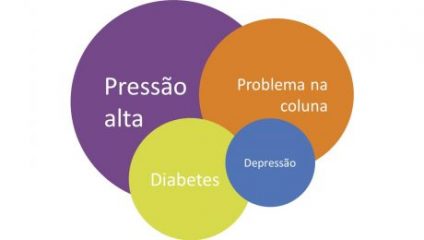 We call multimorbity the presence of two or more health problems in the same person. These problems include physical conditions such as heart problem, diabetes and vision problem, and mental health such as depression. Studies indicate that multimorbity is related to the individuals’ age and socioeconomic conditions, that is, elderly people with worse economic and living conditions tend to be the most affected. In recent years, patients with multimorbidity have become increasingly frequent, which is partly explained by the aging of populations. According to data from regional surveys and the National Health Survey of 2013, carried out in Brazil, at least one in five adults and half of the elderly  community have multimorbidity.

Multimorbidity can lead to decreased quality of life, greater risk of hospitalization, the incidence of mental health problems (such as depression and anxiety), difficulty in finding the right treatment for these diseases and a higher risk of death. Each condition requires differentiated advice and care, but at the same time they must be coupled together. The existence of multiple conditions also poses challenges for health professionals, since traditional forms of treatment, focusing on an individual illness, may not apply to people with multimorbidity.

To read more about multimorbity, visit the studies of our group: